Hey friends, instead of crafting a cheeky introduction to kick off this week’s blog topic, I’ve decided to skip right to the part where I begin ranting uncontrollably. Cool? Cool.

Here’s what’s been on my mind for the past few days: Kesha’s court case.

For those of you who are unfamiliar with the basics of this case, let me bring you up to speed. Back in 2014 when we were all busy playing Flappy Bird, watching Sharknado two, and wondering where the heck Shia LaBeouf was, pop artist Kesha filed a civil suit against Sony Music Entertainment and her producer Lukasz “Dr. Luke” Gottwald. The reason? Emotional abuse and sexual assault during the entirety of her professional career. However, after her lawsuit hearing last week (February 19), the New York Supreme Court denied a preliminary injunction related to the case that would have freed her from working with her abuser of ten years.

As pictures of a sobbing Kesha walking out of court filled the Internet, support from artists like Lady Gaga, Lorde, and Taylor Swift, was abundant. However, several artists who are known to have also worked with Dr. Luke have not been so vocal. Stars like Pink, Brittany Spears, and Katy Perry, have yet to publically voice their opinions on the issue. Which really, really bugs me.

As most sexual assault cases typically render, negative backlash criticizing the victim, Kesha, have swarmed the Internet. “Why hasn’t she come out about this before? She’s probably just doing it for the money. Isn’t this all just a publicity stunt?”

As beautifully articulated in wannabebeaudre’s post last Friday, the general public, simply put, has a lot of misconceptions about sexual assault and rape that must be addressed. Most importantly, if a woman, like Kesha, reports a case of sexual assault it is our duty to believe her. Period. Think about this: only 2-8 % of rape and sexual assault cases are actually false. Ergo, the odds are not in your favor to assume that Kesha has anything on her public agenda other than seeking justice.

With justice on the mind, it’s time we address the bigger issue on today’s blog post plate: How on Earth, did Kesha’s court case turn out the way it did? This question has been plaguing my thoughts for the past few days and, after reading an excellent article from Pacific Standard, I think I’ve finally got an answer. But it’s certainly not satisfying.

The article asserts that Kesha’s case is simply, “unprecedented”. Due to the structure of the music industry, artists like Kesha are pushed into signing contracts with recording companies that employ the use of options. In other words, artists sign on to make ONE record and, if it is successful, it’s up to the record company to decide whether or not they will continue recording with that artist for, essentially, however long they desire. This type of contract, endows pretty much all of the power to the studio, and none to the artist.

Under this contract, artists are not fully considered “employees” and therefore, sacrifice their right to protection against sex discrimination and sexual harassment. Oh, and if an artist wants to get out of this kind of contract they are responsible for paying the record company the estimated profit it would have made if said artist continued producing music with them.

This type of contract, built on the basis of “How much money can our record company make?” is keeping Kesha under the power of her abuser. Not only does this type of working situation prevent artists from being treated like actual employees, it continues to foster support towards our society’s deeply embedded rape culture. By stripping all possible power from the artist and allowing cases like Kesha’s to go on unchecked by law, how can we ever expect people to take rape and sexual assault seriously?

Earlier today, Kesha released her first public statement since receiving news on her case. “This issue is bigger than just about me” she warns, “Unfortunately I don’t think that my case is giving people who have been abused confidence that they can speak out, and that’s a problem.” 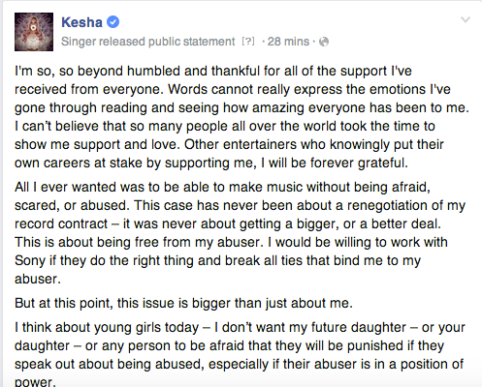 As Kesha, and the rest of her fans, wait for her next trail on January 6, 2017, it is crucial that we do not let this issue go unrecognized because she may be able to take this case farther than anyone has in a very long time; and that’s exactly what we need.

4 thoughts on “Kesha’s case matters a lot more than you might think.”