For the second year in a row, Virginia is placing a focus on our nation’s female heroes.

Of the veteran community, women are the quickest-growing demographic. In 2015, female veterans composed 9.4% of our nation’s armed forces. In 2043, women are expected to make up 16.3% of all living veterans.

This is exceptional, especially considering the grueling fight that women put up just to be allowed to join our nation’s armed forces. Whether it was taking care of the nation as cooks, nurses, and laundresses and keeping soldiers healthy on the front lines in the American Revolution – or the emergence of battlefield hospitals and female surgeons during the Civil War – or the year 1917, when women were finally allowed to join the United States Army (over 30,00 women joined that year) – women have always been there. And our nation could not have done it without them. (*snaps* girl power).

Let’s not forget when the ban was lifted on women in combat (see Call of Duty: Women in Combat).

However, female veterans have to deal with a lot. I mean, A LOT. Many women in the military share that they feel as if they are seen and treated by some as a “second-class veteran”, according to Syracuse University’s Institute for Veterans and Military Families. Female veterans are achieving post-military education success at a far greater rate than male veterans, though still aren’t able to secure employment as easily or as quickly as male veterans.

Take this for example – and I mean really read this. Because I cannot make this up. 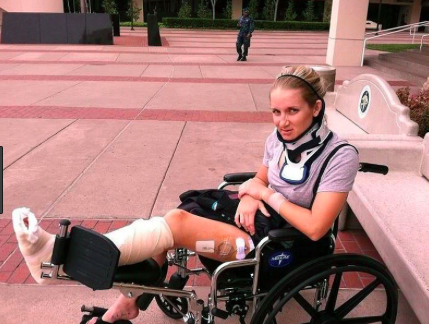 Kristie was deployed in Afghanistan in June of 2012 when the helicopter she was flying in crash-landed.

Her left ankle was broken, her leg was severely damaged, her rotator cuff was torn, her labrum was torn, her cervical discs of her spine were damaged, her jaw was shattered, she had severe facial lacerations, a traumatic brain injury, and post traumatic stress disorder.

Somehow, though, Kristie shared in a video that she is often told that she is “too pretty” or “too frail” for people to believe that she was actually a Marine.

How can a woman who has been through 38 surgeries and still manage to get back up – seem “too weak”?

So this week is not only about honoring our female veterans. It’s acknowledging how incredible they are. It’s recognizing that the journey to a week like this was long – and difficult. It’s about embracing the power that is female.

Thank you to our female veterans – we are grateful – this week and every week.