Hello Everyone! I hope you all are ready for the second part of my series!! This is such an important topic to me because 1, I am a Black Woman in America and 2, I intend on becoming an obstetrician/gynecologist in the near future! As a future healthcare professional I wonder what it could be that is causing these numbers and if they can be prevented at all!

Here’s some food for thought from a tweet I came across while scrolling through my twitter’s timeline. Why is it 2018 and black women still need to be worried about giving birth in America?? 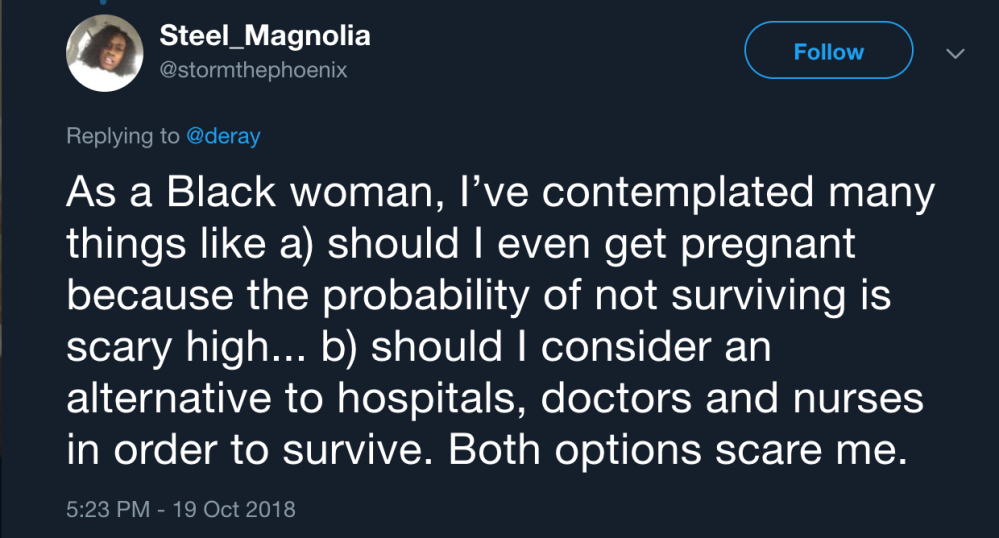 According to the CDC, for every 13 white women who die during pregnancy or within one year of giving birth, there are 44 black women. Most of these deaths can be prevented. Why is it that the rate of deaths among black women is much higher than white women. Essentially, it all stems from our nation’s racist roots, that black people’s bodies are “different” than a white person’s body so their reaction and tolerance to pain must be different as well? Wrong. Below is an excerpt from an article I found that states racism is the key root to all problems, it’s whether you search deep enough to see where from is the real issue.

“Black infants in America are now more than twice as likely to die as white infants — 11.3 per 1,000 black babies, compared with 4.9 per 1,000 white babies, according to the most recent government data — a racial disparity that is actually higher than in 1850, 15 years before the end of slavery. In fact, a black woman with an advanced degree is more likely to lose her baby than a white woman with less than an eighth-grade education.” That statistic was for the people that assume white women must be more advantaged because of their socioeconomic or education status which they are not.  Next. 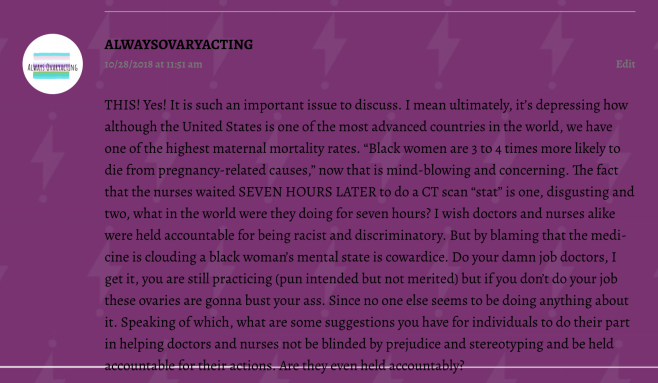 Towards the end of this comment, where @alwaysovaryacting mentions no one else is doing anything there are actually some groups that have been established to advocate for the reproductive justice of women of color! Sister Song, Black Mamas Matter, and those are just two of the organizations that I have found that they are continuously fighting for reproductive justice for women of color, which is, “the human right to maintain personal bodily autonomy, have children, not have children, and parent the children we have in safe and sustainable communities.” This concept was actually initiated by Sister Song is continuing to be a goal for women of color everywhere. In addition, in 2014, Monica Simpson, an executive director of SisterSong spoke before the United Nations Committee on the elimination of racial discrimination by saying the United States was failing to address the crisis of black maternal mortality. Unfortunately, this didn’t go far among many states and I can’t help but wonder why.

The comment above also leads me to leave you all with this statement… What are some suggestions that I have for black women or for individuals to do to help doctors and nurses not be blinded by prejudice and stereotyping and held accountable for their actions? Is there anything at all? I leave this open for comments because I’m honestly not sure if being educated and speaking up is enough anymore. Some thing needs to be done, a revamp to the entire system, I’d even suggest if possible women seek doulas for in-home births and making their birthing process their own so they are not putting their lives in the hands of a system that was never made for us.  That’s all I have for this series, but not all I have to say, @ferociousfem out….for now.

Photo by Shelly Shell on Unsplash