Halloween is my all-time favorite holiday. I take pride in my costumes and plan them out several months ahead of time (yes, I am indeed what you call a huge nerd.) But lately, within the last few years really, Halloween has lost its spirit (ha ha…geddit?) All puns aside, Halloween is somehow becoming a holiday used as an opportunity to be as offensive as possible. I cannot fathom why a human being would use this day to tastelessly satirize the color of someone else’s skin, let alone “poke fun” at an issue as serious as domestic violence.

Smearing black all over your face is not a means of comedic relief and most certainly is not a way to celebrate the Halloween I know and love. It seems to be a trend permeating college campuses, Hollywood and even Youtube. Why is this a thing, people? This should not be a thing!!!

I think what most people miss when it comes to blackface is the history attached to it. It’s a practice that was specifically created to dehumanize black people. Blackface first became nationally popular in the late 1820s when white male performers portrayed African-American characters using burnt cork to blacken their skin. Wearing tattered clothes, the performances mocked black behavior, playing racial stereotypes for laugh. Kelley of The Grio explains that blackface, “Desensitized Americans to horrors of chattel slavery. These performances were object lessons about the harmlessness of southern slavery. By encouraging audiences to laugh, they showed bondage as an appropriate answer for the lazy, ignorant slave. Why worry about the abolition of slavery when black life looked so fun, silly, and carefree? Even the violence of enslavement just became part of the joke.”

It is a practice that was used by white people to create wildly racist stereotypes about black people to justify their treatment of them. So, if you decide to put black shit all over yourself because you think it’s “funny” or “just a joke” please make sure you understand that you are perpetuating those ideas. This dumb blackface phenomenon has unfortunately become increasingly popular over the last couple of years, yet this recent integration of domestic violence to the offensive costuming has begun to rear its ugly head in the realm of Halloween dress and it is sincerely disturbing: 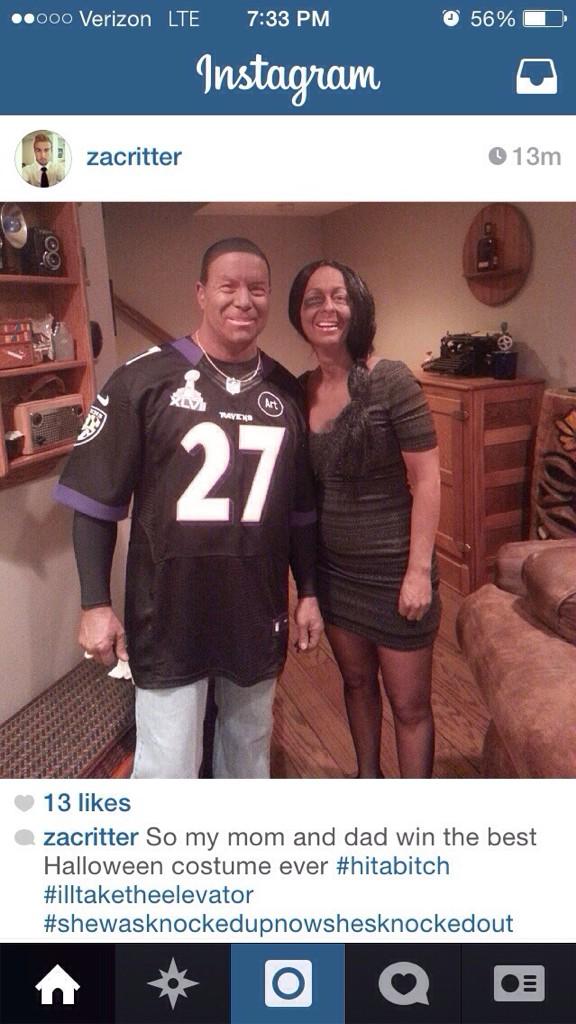 Can someone please explain why this toddler is wearing this costume? I could not believe my eyes when I saw this:

And these….what the actual fuck are these?!?!?! A blow up doll? Really? Not to mention that strange, sad excuse for a “couples costume”:

Janay Rice (Ray Rice’s wife) had a lot to say about the issue and made this statement, “And as Mic‘s Derrick Clifton noted, ‘toxic masculinity and deeply ingrained misogyny leads people to routinely devalue women in nearly all facets of society.’ This is clearly manifesting itself with these Halloween costumes.”

Domestic abuse is not a joke. It’s not a great way to win a Halloween costume party and it is not culturally relevant to normalize this behavior. So, nix the blackface and domestic abuse references this Halloween. Check out some of the Radical Radish’s awesome tips about “How NOT to be Racist this Halloween.”

One thought on “Nix the Blackface and Domestic Abuse”