Over this weekend, a bromance bloomed between President Trump and Japan’s Prime Minister Shinzo Abe, but not for the reason you would expect.

Despite chronically ridiculing President Obama’s number of golf rounds over the past eight years, Trump is now determined to form personal connections with foreign dignitaries through… wait for it… golf! Unfortunately, Trump tends to trash talk on the golf course, leaving a bitter taste in many peoples mouths, and Shinzo Abe isn’t into that type of conversation.

Last year, Trump criticized Japan’s trad strategies, but this year he promises defense to Japan (at their expense) and seeks to establish a new policy that is fair and reciprocal; Prime Minister Abe committed to supporting America through growth of infrastructure programs. We aren’t sure whether Trump was so eager to agree to Abe because he has a hidden card he’s waiting to play later, or if he is maturing into a proper leader.

Despite Trump’s lack of a a brain-to-mouth filter, smile-and-nod responses, and awkwardly long hand shakes, Abe left America on a good note. Lucky for us, when all else fails, everyone can always bond over naughty North Korea. 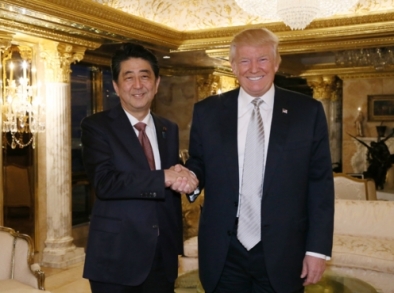 On Sunday morning, North Korea tested a ballistic missile. The missile, named Pukguksong 2, is a new type of strategic weapon with a solid-fuel engine which means it can go longer distances and be set up faster than the standard liquid-fuel engine missiles. They fired it into the Sea of Japan, while Prime Minister Abe was in America, golfing with President Trump. Once fully developed, this missile could threaten the US. South Korea claimed that this was North Koreas attempt to provoke and test Trump’s response.

This is the first missile test from North Korea since Trump was elected, but America has been expecting some sort of provocation from them since Trump’s claim to get tough on their missile regime. This missile testing was in direct violations of the United Nations Security Council resolutions. NATO also condemned this action and told North Korea that they must abandon their ballistic missile program immediately.

In order to dissuade North Korea from going on another power trip, Trump is trying to get stronger ties with leaders in the Pacific. Abe claimed this test was “absolutely intolerable,” and in response to this Trump said he would stand with Japan and offer protection, stating that “America stands behind Japan, its great ally, 100%.” And thus the epic Abe-Trump bromance is sealed.

So what does this mean for us? We’re on good terms with Japan, Trump didn’t respond rashly, and it seems like North Korea is bringing the EU and America closer together by being blatantly disrespectful and provocative. Remember, the enemy of our enemy is our friend!

If you have any thoughts or comments, please feel free! We would love to hear from you!