An exploration into the concept of “Clitoracy”

My roommate is a women and gender studies minor, so we often get into great discussions about the overlap of the things we learn in classes. Recently, she introduced me to a ted talk from a woman named Sophia Wallace about the concept of Clitoracy. This was a concept she was unfamiliar with before learning it in class, and before she introduced it to me, I, too, was unfamiliar. As a woman, it is shocking to me that this is something I did not know considering it relates not only to female healthcare but also to the stigma surrounding women and their bodies. I thought this would be a great blog post because I would love to share the knowledge with a broader audience and hopefully expand the important conversation.

I want to begin by talking about sex education in schools. I’m sure everyone has a different experienced when it comes to sex education in schooling, however, I’m sure we all learned similar concepts. Wallace, in her ted talk, speaks about what we learn in school. She says that we learn as girls that abstinence is the best way to go, we learn that males are both sexual and reproductive. Boys have erections, boys have wet dreams, boys ejaculate, and the semen fertilizes the egg. Girls have reproductive organs. They menstruate, menstruation is painful, and girls should not get pregnant if they don’t mean to. We never learn about the clitoris. We never learn that girls have desire, that girls have fantasies. What we learn in sexual education aids in shaming women. Women should not have desire. Their organs are reproductive, not sexual.

Something I was shocked to find out and even more shocked that I did not previously know was the actual shape of the clitoris. We learn terms like “bean” or “button” but what Sophia Wallace mentions is that it is not a button, it is actually an iceberg. A relatable statement that Wallace admits is “I was shocked to find out that I did not know the actual anatomy of half of the population, that I did not know my own anatomy.” The clitoris is like an iceberg, most of the organ is internal. A great point Wallace brings up almost immediately is the fact that female genitalia is a “universal taboo”. It taints the speaker. Not only does this shame women for their anatomy, but it also is a healthcare issue. A huge point Wallace makes sure to point out is that the clitoris has a right to being. Sadly, over 140 million women are victims of female genital mutilation. This does not make it into the news very often and it does not come up in foreign policy discussions. The clitoris has a right to exist, unharmed. Wallace comically points out that humankind made it to the moon, cloned sheep, and identified the Higgs Boson particle, all before discovering the clitoris, which happened less than 40 years ago….(I know??).

Wallace then gets into the importance of language in shaping discourse. She mentions that with her project, she started with language because the subjugation of women has been entrenched in the language itself. She then states that she believes the word “Vagina” is the single most misused word in the English language. This is because medically, it only refers to the opening. “Vagina” is a Latin word that means “sword holder”….(seriously). This term is used universally in doctors’ offices and in feminism to advocate, but it is a term that ignores the clitoris, which is the female sexual organ. It also reduces the female body to be a receptacle, a “sword holder”. 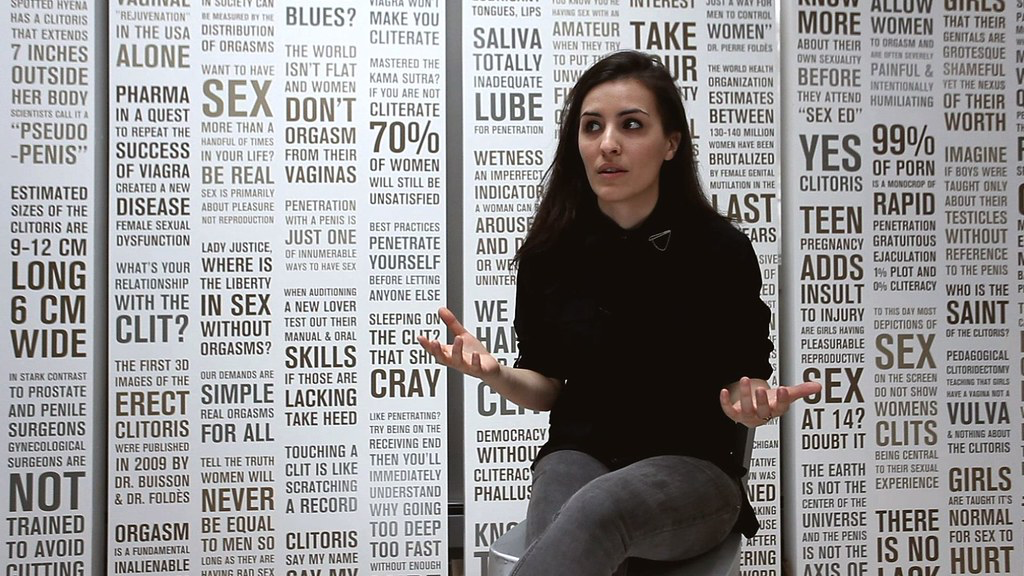 On a related note, in her powerful piece, Sophia Wallace mentions that she purposefully does not create sculptures that are small, made of soft fabric or yarn, or purple or pink in color. Instead, she works with metal and stone so that the structure can last thousands of years and so that we don’t have to have this conversation over and over again.

At the end of the TedTalk, Wallace admits her dream is to “radically change the way we think about bodies so that everyone’s body is respected”. She does this by creating large permanent, public sculptures and art pieces showcasing language. I highly advise you to check out this TedTalk and also this art piece. It is incredibly eye-opening and inspiring and I truly believe every body with a clitoris deserves to see it. If this topic interests you, I also highly suggest that you check out the 2020 Documentary “The Dilemma of Desire”, which covers similar subjects.

2 thoughts on “The Hole is not the whole”