During my senior year of high school, I met my first boyfriend. While we had issues, we would continue to date through part of my junior year of college. We went to different universities, so the long distance aspect of the relationship took away time from other facets of my life. My boyfriend and I would take turns visiting each other’s schools on weekends, and for a while it worked. 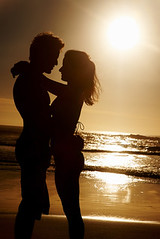 “A young couple romancing at the beach” by LyndaSanchez is licensed with CC BY-SA 2.0. To view a copy of this license, visit https://creativecommons.org/licenses/by-sa/2.0/

During my sophomore year I began to realize that I wasn’t happy though. The relationship was causing me to spend less time with friends, and I began to question my situation. Once the unhappiness set in, I began to realize the red flags that I hadn’t noticed previously. Still, I didn’t leave just yet.

While I was able to address that I would have had more freedom single, I feared being alone. I wondered what would happen when I had a breakdown and I didn’t have a partner there to comfort me. I questioned how I would spend all of my free time if I were single. The unknown scared me, so I stayed.

It wasn’t until the fall of my junior year that mustered up the courage to break up with my boyfriend and venture out into single life. The decision was hard but necessary.

At first, I was having a lot of fun. Newly single, I enjoyed the perks of doing what I wanted when I wanted. I loved not having to check in with anyone, but then I began to realize why I stayed in my relationship. I remembered the comfort it brought me; the sense of security that I no longer had. To combat this, I started casually dating. Casual led to not so casual and once again I had a person that I grew an attachment to. Once this fling came to an end, I began to realize that I had an issue with correlating my happiness and self-esteem to my relationship status. While it is okay to be disappointed when something ends, it is not healthy to let it dictate how you view yourself.

Because I had not been single through some very developmental stages in my life, having a man in my life became a norm and almost a necessity. It was a need instead of a want. Part of this I take responsibility for. I chose to be in a relationship for as long as I did, but I also think that as children, girls are made to believe that we find our happy ending in life when we settle down and get married. It is the common theme for plots in movies and books. It was also viewed as desirable for men to be bachelors, but if a woman was single, something must be wrong with her. She would receive sympathy. If we are taught that a relationship is the goal in life, why wouldn’t we put a majority of our energy into it?

It wasn’t until this past summer, that I really took the time to look inward and think about what I could do for myself to make myself happy. Taking the accountability for my own happiness was the first step I took towards independence. I have been finding new things I enjoy, and I might not have had the time to do this if I were in a relationship.

Now happily single, I have come to the realization that we have it all wrong. As a woman it is vital to spend portions of your life single. Only then will you be able to find the person you want to be. Once you have found that, a healthy relationship is attainable.

Spend time with your friends and enjoy your life on your own. A romantic partner is meant to add to your life; it shouldn’t be the reason why you live your life.