Women all over the world are sexualized on a daily basis. We are sexualized for our breast, butt, and vagina. as explained in unicef’s article,  a 2010 study from Americian Psychological Association found,

“on the sexualization of girls in the media, exposure to media among youth creates the potential for massive exposure to portrayals that sexualize women and girls and teach girls that women are objects.”

We are raised and socialized by social media, tv, books, magazines, that we, and our body parts, are objects, sexual objects. And with our current political culture, how are these socializations supposed to stop? Who will stand up for the vagina? Women of all races, abilities, ages, and genders, are having these expectations forced upon them.

But not anymore Satan.

Local James Madison University senior, Alyssa, is here to make the word vagina great again. Alyssa started the phrase “Gine” last year as a way to normalize women’s reproductive arts, to introduce it into everyday conversation, and to take the word back for the women. Many of times Alyssa will great her friends as “Gines,” regardless of their sex, gender, race, age, etc. She’ll call anyone “Gine,” from her dad to her roommates. From using this word in every day conversation Alyssa has rebranded the idea of women’s reproductive parts, she makes it fun and light hearted, less about sex and desire. When asked about what’s her favorite thing about “Gine,” Alyssa responded:

“The fact that it breaks sexual stereotypes and men are now not using it to objectify and sexualize women.”

Many phrases in current pop culture have been criticized for degrading and sexualizing women and their sexual organs. One word that currently has controversy is the word “Pussy.” In  New Republic’s article, “The Problem with ‘pussy,'” they explain how controversies with the word pussy branches off form Donald Trump’s statement, “Grab ’em by the pussy”

Critics argue that the idea of the word “pussy” comes from the term”pussy cat” which is meant to be dehumanizing and to show how women are inferior. Pussy is a very common theme within today’s pop culture, from having reassuring appearances in music and television, it has evolved to be a common term when association to the woman’s vagina.

Some feminist however, have took stand to take pussy back and to bring a positive light on the word, using phrases such as, “pussy power” or “this pussy grabs back.” This can be a successful idea, to rebrand the word, just not sure how much impact if can have when it is still being used to express women negatively on a daily basis. 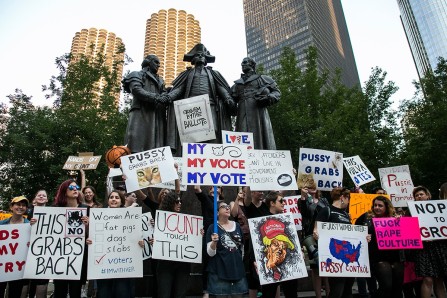 Image from the Chicago reader

This is why Alyssa’s famous “Gine” has become so popular. When going around campus, to downtown, or even reaching as far as her hometown in New Jersey. Normalizing and desexualizing Gine (short for vagina) has made an impact on Alyssa and her friends, shining a light on her fellow women and other sexes. Taking a step froward in the on going sexualization of women and their reproductive parts.. Stay Strong and Gine on.

One thought on “Have You Heard of “Gine”?”