“A win is a win,” Donald Trump stated in a Tweet last night after Jones won over the Senate seat for Alabama, a serious upset as far as predictions go but a great moment to rejoice for humanity. 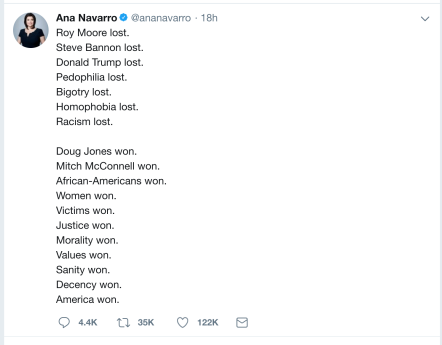 But… almost a full day layer, Moore still will not concede. Poor sportsmanship? Ignorance? Denial? What do you think? Regardless, this is proving that Alabama residents voted correctly. Although the votes were tighter than anyone had ever hoped, Moore’s loss is still a loss, just as Jones’ win is still a win. The lack of integrity, virtue, and principle by this move make a loud statement that Moore is not done. Moore is not ready to give up, and his speech last night said just that.

I have been speculating all morning as to why he won’t admit his loss, but I know that it doesn’t matter in the end. What matters to me is that the wonderful black voters of Alabama showed up for America, and for humanity. The #metoo movement can also be thanked for the victory, opening a space for powerful dialogue and awareness on the issue of assault and inappropriate behavior. Showing that our legislators need to be held to the standard of not being pedophiles, or anything even remotely near such a disgusting lifestyle, is a no-brainer to me. The votes, however, do not show that “no-brainer” mentality.

The immorality of voting someone with such low regard for integrity and respect into office would be a loss for Alabama and even the Republican party. Many republicans today have been thanking their stars that he did not win, knowing that it may be losing a battle but not the war. The disappointing factor is that he won by such an immensely small margin.

Priorities in Alabama are very different than the priorities and values that we should have for our representatives. It is embarrassing to have a pedophile even this close to representing the great state. Although I feel hopeful and joyous for this win, I feel apprehensive about the uneasiness in winning by such a small percentage.

Roy Moore may be saying that “God is in control,” but this is a democracy, and the people are in control. No Moore, but a big W for humanity. Cheers, Alabama – you’ve done America well this week. I look forward to seeing how Jones makes history, leads on policy change, and honorably represents the great people of Alabama.