I don’t talk about it with many people, but depression is a beast I have struggled with for much of my life. I wasn’t given the emotional vocabulary to articulate this condition until high school, but the feelings are all too familiar. Trying to explain depression to someone that doesn’t have it is extremely difficult. Trying to explain mental illnesses can often heighten feelings of anxiety and isolation. With roughly 9.8 million Americans struggling with a serious mental illness, it’s important to find a way to address and understand the experiences that so many go through.

Hyperbole and a Half: Adventures in Depression by Allie Brosh

Allie Brosh addresses a wide range of topics on her blog, but her illustrations on depression are particularly hilarious and inspiring to me. Brosh discusses the feeling of when depression onsets, seemingly with no reason and with an accompanying sense of apathy. Her illustrations also discuss the frustrating process of trying to talk yourself out of depression, usually by shaming yourself. Brosh captures the feeling perfectly when she writes, “But trying to use willpower to overcome the apathetic sort of sadness that accompanies depression is like a person with no arms trying to punch themselves until their hands grow back.” It’s a helpless tactic and rarely leads to inspiration or comfort. Oftentimes with depression, you become abusive to yourself. 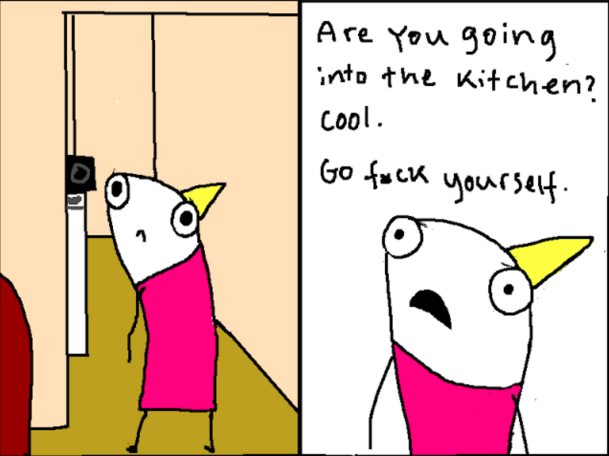 While I found these comics humorous and relatable, they don’t offer much in terms of how to “escape depression.” This was okay with me, though. Depression reminds me of alcoholism in that I don’t think one is ever “cured” as much as you simply learn ways to care for and nurture yourself through difficult bouts. Her comics speak to the experience of struggling with depression in a way that words cannot and in some ways, that is more important than offering advice.

I Do Not Have an Eating Disorder by Khale McHurst

Khale McHurst’s series titled I Do Not Have an Eating Disorder explores the cognitive dissonance in feeling like you shouldn’t have an eating disorder, making it even harder to admit. The comic above addresses the reality that it IS possible to be a “successful,” feminist person while still struggling with an eating disorder. It also reminds us that stereotypical portrayals of mental illness do not capture their complexity. Mental illnesses come in all shapes and sizes and we have to be gentle with ourselves, not judgemental.

This Buzzfeed post chronicling the existence that is life with anxiety was one of my favorites. It features several different artists and touches on a wide range of possible experiences; including various coping mechanisms to overcome anxiety, the physical symptoms that accompany it, and the ever-present overanalyzing that is a staple of anxiety.

The above illustration by Claire Jarvis captures the struggle of getting out of bed when plagued by anxiety.While many of the illustrations focus on the negative aspects of anxiety, the article ends on a positive note reflecting that “it’s comforting to know you’re not alone.” And indeed, I think one of the most important aspects of all of these illustrations is reminding people that they are not alone. Comics and illustrations can also help people to understand mental illnesses in a way that isn’t so distressing for those with the condition.

Mental illness isn’t easy, but it’s important to open up the conversation and I think the comics are a great way of doing so!

4 thoughts on “An Illustration of Mental Illness”