Last night, I had the pleasure of listening to the amazing Brian Sims speak. Brian Sims was the first and only openly gay football team captain in NCAA history as well as the first openly gay representative of the Pennsylvania General Assembly. He currently represents Pennsylvania’s 182nd district, located in central Philadelphia. He was elected to this position in 2012, unseating the 28-year incumbent. Hearing what Brian had to say about his involvement in queer and feminist politics made him one of the most interesting speakers I have ever heard.

Since Brian was young, he knew he wanted to go into law. When he was 12, he knew he wanted to fight for women’s rights but, being so young, he would say he wanted to be feminist lawyer. As adorable as it would be to hear a young kid say this, it is amazing how Brian knew what he wanted to do from such a young age. As Brian spoke throughout the night, you could feel the passion he had for feminism and queer politics exuding from his personality.

Two of his points that stuck out to me were his “silver bullets” for a lot of the issues we face in politics. The two that he discussed were educating the shit out of everyone and putting more women in politics.

When he talked about education, he talked specifically about how it is lacking in so many places. If we educated everyone on an equal level, the amount that we could cut down on our budgets for defense and criminal affairs would be immense! Even if it might seem like a lot of money that doesn’t change anything immediately, education takes time. If we invested more into education, especially in areas where the education quality is lower, it would come back to save us so much more money in the future and hopefully reduce criminal activity.

Brian’s other silver bullet was to put more women in politics. Statistically, Brian says, women in America are generally more empathetic than men. This means that women are more likely to put themselves in another persons shoes to analyze the situation, whereas men are statistically more likely to assume that everyone else is thinking the same way they are.

Having more women in politics would first of all be great in order to have more women’s voices heard. But based on that statistic, it is important to have women in politics because they would be more willing to see multiple perspectives rather than assuming that everyone automatically thought the same as they did. 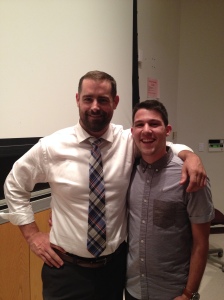 If you couldn’t tell by my face in this picture, I want to be best friends with Brian now. Brian made many interesting points the challenged my thought process and I am so inspired by how he has paved this lifestyle for himself, especially by some of the experiences he talked about in college at Bloomsburg University.

One of the most interesting points he made directly conflicted with my previous thoughts, but gave me a lot to think about. I had been introduced to the concept of “Bystander Intervention”, which is intervening and explaining the why people’s language is offensive when you hear something inconsiderate said, if you feel safe.

Brian said to let people talk, even if it’s extremely offensive. He advised to let people say what they think; good, bad, or indifferent. When those people speak, it just reaffirms in everyone else who is a passive ally, why they are an ally. After multiple of encounters for passive allies, it may help to encourage passive allies to become more active allies.

There are so many amazing ideas that Brian talked about and I am so happy to have had the pleasure to meet him. Brian is a wonderful human being and a great ally to many communities. Now when can we get a Brian Sims in Virginia?