Unfortunately, we live in a society filled with exclusivity and unacceptance. We judge people before really getting to know them and we are uncomfortable by certain things that are not considered the “norm.” This forces me to ask myself, ‘What is normal, anyway?’ BORING. “Normal” is boring.

Bisexuality is characterized by society as “abnormal”. Bisexual people receive a lot criticism for who they choose to love. Why? It is because people are afraid of what they do not understand. People are afraid of what they see as unusual. Bisexuality has an uncomfortable persona attached to it from the hate and negativity derived out of so many monosexual people in our society.

There seems to be a certain stigma positioned around the two words, bisexual and bisexuality. Attitudes from many heterosexual and gay/lesbian individuals towards bisexual people are extremely prejudice and discriminatory. The stigmatization of bisexuality among monosexual individuals is known as “Biphobia”. This term refers to having hostility or revulsion toward bisexual people.

Greedy, cheaters, uncommitted, sex attacks, “going through a phase”. These are just a few of the many misconceptions formed about bisexual people. The biggest fallacy created about bisexuality is the idea that bisexual people are liars. They are lying and trying to hide that they are gay/lesbian, which is absolutely wrong for people to assume on many levels. It is OK to be sexually attracted to multiple genders. Bisexuality is extremely misunderstood by those of our society who simply refuse to accept it.

Bisexuality is perceived by many as a state of confusion. Bisexual people are told repeatedly, again and again, that they are ‘gay and lack the courage to accept and admit it.’ Imagine someone telling you that you are something that you know you are not. That is the type of judgement and unacceptance bisexual people receive every single day. They are categorized as “confused” and ridiculed for being attracted to multiple genders, while being tormented for not conforming to societies expectations.

Why can’t people love who they want and when they want, without judgement? Why do people have to judge others for being different than them and for stepping outside of the “norm?” Why can’t we just live in a world where we accept all different races, genders, shapes, sizes, sexual identities and sexual orientations? There is always going to be someone out there who will disrespect you and make you feel like shit. Just know, their judgement is derived out of fear of the unknown. Stay strong. Lift your head high and know that you are loved by so many accepting individuals. You are powerful and brave. Block out those haters because they are not worth your precious time on this earth. 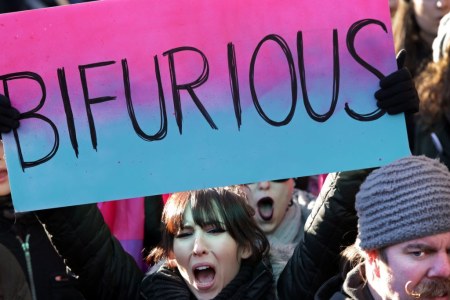 I am a straight, white women who accepts people for who they truly are, no matter what their gender, race, sexual orientation and sexual identity is. Bisexuality is not something that should be judged or stigmatized, it should be celebrated. Bisexual people should not have to feel like they are some outcast, floating in-between being straight and gay/lesbian. Society has dismissively labeled bisexuality as a lying phenomenon, saying it is a state of confusion.

Bisexuality is love. Bisexuality is living. Bisexual people are fighting day after day and night after night trying to find some sort of acceptance from others, but simply cannot. The “B” in LGBTQ+ is often left out. Why? Because we are a society that focuses on stigmatization rather than acceptance.

That needs to change, and a change needs to happen now, or our society will crumble into an abundance of judgmental and discriminatory human-beings.

Oh wait, that already happened… we are living that right now.

What will you do?

One thought on “Bisexuality: Stigmatized not Accepted”