Here is what we’ve been talking about this week!

Despite politicians attempts to explain how climate change isn’t real, or that global warming is a lie, facts state otherwise! Farmers use a rainfed practice called milpa, which helps overcome the poor soil conditions. Some of the items which they grow include varieties of beans, squash, chili peppers, leafy greens, root vegetables, spices and corn.  However, climate change has brought erratic and  rainfall, causing crops to fail. Althought rainfalls is generally unpredictable, climate change has made rainfall exponentially unpredictable.

The UK has come up with some policies for Brexit

The most important one we focused on is their proposed policy for immigration, which mirrors that of Canada; they will accept immigrants and refugees who fill skill shortages!

Laugh with us now…

President Trump has over 50 lawsuits against him at the moment. At least not everything is going wrong.

Updates on the immigration ban

At this moment, Trumps ban is floating in limbo, while courts temporarily suspend the Executive Order. Of course, Trump is upset and tweeting out about the unfairness of the limitations of his power… 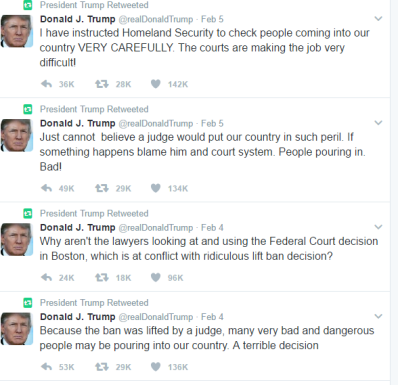 Clearly, it’s the courts limiting our Presidents power that is putting us in danger…. Not.

Budweiser and their Immigration advertisement

Kudos to Budweiser for showing support for Immigrants, who are the backbone of this country!

What are you talking about? Drop a comment and let us know!