Imagine being a young adult or child, idolizing non-binary characters in television and film then finding out some of your role models are actually cisgender actors. They’re frauds who could play your identity, your lived experience, better than someone who actually identifies as transgender/non-binary. It’s like a kick in the ribs, the sharp stinging reality that even though your identity is getting more representation, there is still a power struggle. Where privileged actors get priority over minorities and stereotypes keep perpetuating in a vicious cycle.

It is common theme in comedy to portray males in roles that counter our conception of masculinity. Some of these roles are meant to benefit the acceptance of gender identity; however, when these roles are portrayed by cisgender actors, we lose the authenticity and representation for actors who go through life in that identity.

It is like blackface all over again: privileged individuals (non-minorities) representing minorities, giving flat and often times offensive representations of the real life struggles of others. It is one thing to be an actor, but it is another thing to portray an identity in a way that may be offensive to members of that specific identity.

In recent news, Jen Richards (actress and writer for Herstory) brings attention to Matt Bomer’s casting as a trans-character in the movie Anything, and gives reasons for why this is an issue. 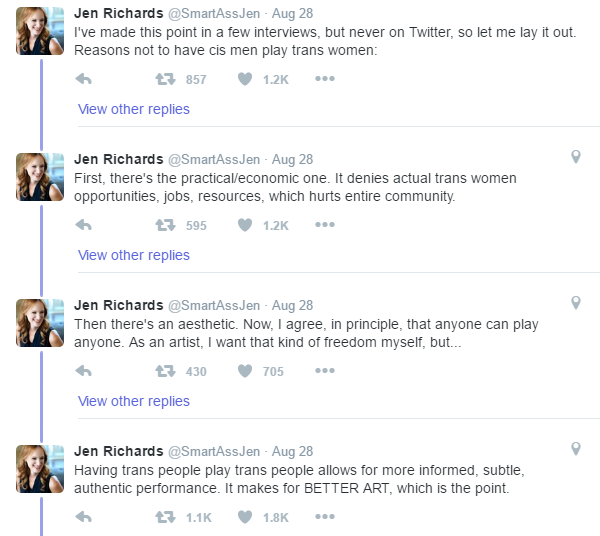 I think her words speak enough on this issue. Artistic freedom is not a game, it is not an excuse, and having male-identifying actors play trans-women identities is just as offensive and reductive as blackface. In fact, tansface is now a coined term. Yes, some people are great actors and it would be awesome to add ground-breaking identity-acceptance to their resume, but it is time we think critically about what their role representations actually mean. There are real life consequences for non-LQBTQ+ actors portraying those specific identities.

If you would like to support real life individuals and actors who play authentic roles, consider exploring these television shows listed below that I have compiled for your benefit. In addition, I have listed shows in contrast which have actors with privileged identities representing non-binary characters. These examples are not all inclusive, theyre just ones that I am familiar with, if you have any examples you would like to add, I would love for you to comment!

I define privileged identities as white, male, cisgender, christian, and/or wealthy. I define identity-minority as individuals who do not conform to or identify with hegemonic binaries. Non-binary, LGBTQ+, minority, and transgender are used interchangeably throughout this article.

16 thoughts on “Transface: The issue with non-binary identities played by cisgender actors”