I took piano lessons when I was younger. I also played the violin and the flute. I always had my homework completed on time. I’m good at math. I love group work. I have strong ambitions and a deep resolve in succeeding my goals. But I also have other interests and other aspects about me. But when I was born, I was marked with an identity that would put a label on my life despite whoever I would grow to be, which is a feeling that many individuals with stereotypes will understand. I would be placed under the title of a Model Minority.

According to A Brief History of the ”Model Minority” Stereotype by Andrew Chin, ‘Model Minority’ was coined by sociologist William Peterson. In his article titled “Success Story: Japanese American Style” published in the New York Times Magazine in 1966, Peterson wrote that Japanese culture of family values and strong work ethic helped Japanese Americans overcome prejudice and avoid being a “problem minority.”

Now, one may ask why being identified with a great work ethic and ambition to succeed would be a negative stereotype. I mean, I know in Elementary School I personally threw that card at kids who would make fun of me for my ethnicity. Yet, there is a deep-set problem with this myth. As the Asian Student Union at U.Va eloquently put it, “The Model Minority Myth (M3) flattens the heterogeneity of the diverse pan-ethnic experiences and identities of Asians and Asian-Pacific Islanders. The myth obscures the actual struggles that Asians face in education, discrimination, mental health, poverty, along with many other important issues.” So, basically the M3 undermines and dismisses the idea that racial discrimination can deprive minorities, including Asian Americans, of fair opportunities in America. 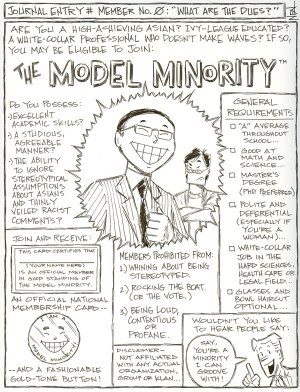 Some argue that since Asian Americans are doing so perceivably well, there is no racial discrimination and no longer need public services such as bilingual education, government documents in multiple languages, and welfare. Honestly, the M3 is a SnapChat on the latest My Story update of a documentary. The Model Minority Myth shrouds what’s actually going on here. Not all Asian Americans are the same, a statement that seems so simple but still is not so easily conceived. According to The Model Minority Image, “For every Chinese American or South Asian who has a college degree, the same number of Southeast Asians are still struggling to adapt to their lives in the U.S.” In the table from the Socioeconomic Statistics & Demographics article, it recognizes the stark differences of the college degree attainment rate within different Asian ethnic groups.

The Model Minority Image article goes on to state that the reason why Asian American families have higher median incomes than White families is because as a whole Asian families have more people working. Despite this, Asian Americans still trail Whites in median personal income (also known as per capita income).

Although there are many cases in which Asian-Americans do remarkably well at school and university, and have high average incomes, there is a very real limit of discrimination. In the workplace they are under-represented in top jobs. A term called the “bamboo ceiling” seems appropriate.

In A Bamboo Ceiling Keeps Asian-American Executives From Advancing by Buck Gee, he states that “The bamboo ceiling is real, but its roots, and our failure, stem from our success. Because there are elements of truth in the narrative, the idea of the smart, hard-working model minority has created an implicit bias that Asian-Americans are great thinkers and doers but lack the assertiveness, vision and interpersonal skills to be successful organizational leaders. The stereotype of the quiet, talented professional has led to the widespread assumption of an ill-suited business leader.”

In an article from The Economist, it states that Buck Gee, Janet Wong and Denise Peck, Asian-American executives put together data from Google, Intel, Hewlett Packard, LinkedIn and Yahoo for a report and found that 27% of professionals, 19% of managers and 14% of executives were Asian-American.

There is no good v. bad racism or discrimination. It’s still detrimental, restricting and homogenizing. It creates a negative culture and stigma surrounding Asian-Americans. As a second-generation immigrant who grew up in the NoVa bubble, all the expectations and save-face attitudes were so palpable. There’s an attitude among students whether or not one should state that they’re Asian or not. There is still discrimination. There is still racism.

What Kind of Asian Are You? – Alex Dang