“His Best Sex Ever”

These headlines, taken from past issues of Cosmopolitan Magazine, all have one thing in common: each focus on “him” and what “he” wants out of sex. For a women’s magazine, that’s an awful lot of attention given to men’s needs. As I explored the idea of women’s sexuality more and more, I realized that this issue is much larger than an offensive Cosmo cover. In fact, sex in general is societally defined by male needs and desires, and women are expected to meet them. Women are held to impossible standards of having enough sex to be considered desirable (mostly by men), and not enough to be considered “too easy.” And that, dear readers, is pretty ridiculous. 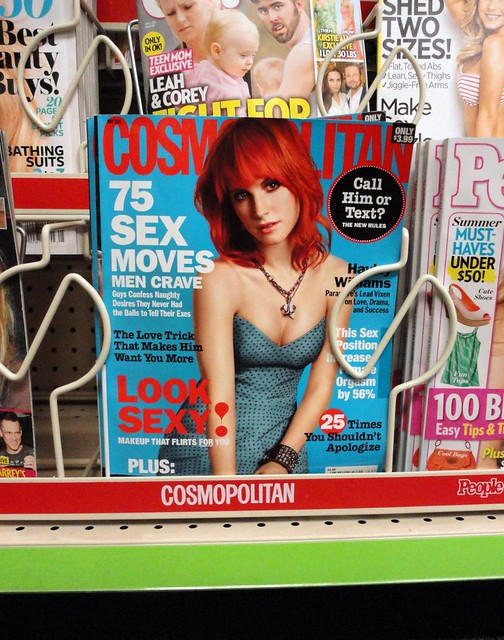 While we have made improvements in women’s sexual freedom over the last few decades, we’ve come to a standstill with regards to one particularly judgmental double standard: men who are sexually active are considered to be studs, while women who are sexually active are considered to be sluts. This tired trope is thankfully becoming less and less common, but the underlying idea still permeates our culture. Even the words we use to define sexually active men have more positive connotations than the words we use to describe women. In addition, the words used to describe men promote sexual autonomy and domination (stud, womanizer, player, etc.), whereas the words for women are either passive or imply disgust (slut, whore, easy, etc.).

Sexual desire and sexual activity are human urges, yet men are encouraged to feel and talk about those urges, while women are encouraged to suppress them (but not too much!). Because, of course, women can’t have too much sex lest they be labeled a slut, but also must have enough sex to avoid the label of “prude” or “tease.” The character of Allison from The Breakfast Club sums up the issue nicely:

Women are also responsible for the sexual satisfaction of their partner in a way that men are not. There are numerous examples of articles written on “how to please your man,” contributing to the idea the women have sex for the pleasure of men. Focusing on your partner is not inherently a negative, however the disproportionate amount that women are expected to focus on their partners is problematic. Women are supposed to take care of the sexual needs of a relationship, including having sex with their partners, even when they don’t feel like it.

We have a long way to go with regards to sexual equality for men and women, but the first step is recognizing the problem in the first place. I encourage everyone to check out the women’s section of the magazine rack next time you’re in the grocery store. How many articles are men-focused rather than self-focused? Let’s start noticing the problematic representations of women’s sexuality, and then let’s demand more. If we do, I look forward to the next Cosmo cover reading “MY Best Sex Ever.”