There’s good news and bad news. If you’ve never watched “RuPaul’s Drag Race,” a reality show about drag queens competing to become “The Next Drag Superstar,” then you’re in for a treat, but you’re also likely to experience some confusion over all of its cultural appropriation. Drag Race appears on Logo and VH1. The show debuted in 2009 and its seventh season is set to come out March 2, 2015 with two new judges. I think the contestants’ over-the-top confidence, comedic wit, and fabulous hairstyles can all teach us something about life.

I love watching “Drag Race” not only because it’s outrageously hilarious, but also because it’s one of the few shows on mainstream TV that portrays LGBTQ (lesbian, gay, bisexual, transexual, and queer) identified people. It teaches a lot about genderqueer and drag culture, which gives it a lot of influence in many people’s understanding of LGBTQ life, especially after six seasons, with a huge social media following of millions of fans. People are becoming more familiar with drag culture.

The show promotes a message of self-love and acceptance, with every episode ending with “Ru”(Paul) saying “If you can’t love yourself, how in the hell you gon’ love somebody else?! Can I get an ‘Amen?” All of the cast members including RuPaul himself have experienced some kind of intolerance and external institutions of hate in their lifetimes, sharing stories of familial rejection, losing friends to suicide, and battles with HIV among many other things. The show brings much of this to light through contestant’s dramatic break-downs, and tearful conversations with each other, clearly showing the struggle of the LGBTQ community in our society.

The show also hits on many important LGBTQ topics like the repeal of “Don’t Ask Don’t Tell,” when they brought several gay military men who served both before and after the repeal onto the show to talk about the experience, as well as to be dressed up like drag queens with their contestant partners in season five. The show tries to bring comedic relief to a discriminatory culture, using satire to allow the LGBTQ community to reclaim ownership of many slurs.

But most importantly, by showing how (mostly) male-identified people can use dresses, heels, padding, wigs, and makeup, (all the forced trappings of our society’s ideals of normative femininity in the gender binary), to create an illusion of being a woman, it does a great job of challenging our normative ideas about gender, while promoting the idea that gender is performative act, which coincides with feminism and queer theory.

Queer theory, believed by most feminists these days, basically says that there is nothing inherent about gender. It’s socially and culturally constructed based on time and place. So there are no “real” traits that boys and girls fundamentally have based on their gender assignment. It’s good for all of us to understand this concept so that we can stop making assumptions and prejudices based on gender. The men on Drag Race beautifully illustrate this concept with their fake, “constructed” femininity. They show us that all of our ideas of femininity and masculinity are actually social constructions, ones which are usually ignored in our every day lives. Drag queens show us that gender can be anything we decide and want it to be. 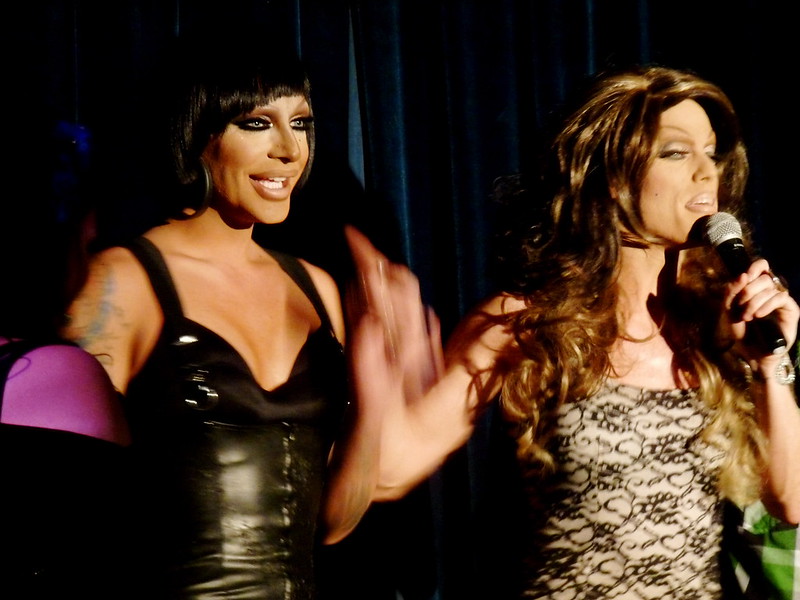 These men are also celebrating femininity in a culture that continually degrades it compared to masculinity. Some people may think they’re making fun of it, but I see it as just a creative performance of exaggerated femininity. It’s an art form that can sometimes be hard to understand. And sadly, even this extremely open and accepting show has its fair share of misunderstandings and degradation based on the intersectionality (race, class, sexuality, gender identity, and size) of its contestants and audience.

There has been a lot of controversy over the show and its depiction of trans people. One segment where RuPaul sends video messages to the contestants is called “You’ve Got She-Mail!” a play on words from the derogatory term “she-male” used to describe trans women. The contestants also commonly use derogatory terms like “tranny” that can confuse viewers into thinking the drag queens are trans, when they actually identify as men. However, The show announced last year that they would stop using this term and others like it, in order to be more sensitive to the trans community.

There are even more issues with the show that we should be aware of if we want to partake in the hilarity of Drag Race with a conscious and informed mindset, including racist stereotype appropriations of women of color being sexualized and animalistic, and even some derogatory language (and invisibility) of actual women on the show, such as the term commonly used that contestants are “serving fish” meaning passing as a woman, which is degrading towards women’s bodies, and there is terrible fat-shaming among contestants. However, season five’s Foxxxy Andrews was a plus-sized drag queen with a good sense of self-confidence and self-acceptance about her body, showing off revealing runway looks, which makes me think that Drag Race is becoming better about this issue.

Although Drag Race does make many attempts at subversive humor, it misses the point on some things, causing some damaging hegemonic stereotypes to be reinforced about ethnicity, class, sexuality, gender identity, and size. However, I think it’s still worth a watch, because the anti-oppressive elements outweigh the oppression on this show. It would be bad if the derogatory language and representations of women and trans people on this show were taken literally by people who don’t understand that they are appropriations, so we need to be aware of these issues in order to watch this show with a progressive mindset and understand that some things drag queens do for humor can be pretty inappropriate if tried out of context.

RuPaul’s Drag Race is making strides towards becoming more open and supportive of all types of drag and queer identities, which is no doubt a step in the right direction for all of us.

The show’s producers recently said, “We delight in celebrating every color in the LGBT rainbow. When it comes to the movement of our trans sisters and trans brothers, we are newly sensitized and more committed than ever to help spread love, acceptance and understanding.”