Did you know there are options for male contraception other than condoms? Let’s talk about it.

One of the most up-and-coming options for male contraception is something called Vasalgel – a non-hormonal, reversible form of birth control that blocks the vans deferens, aka blocks sperm from being released. Non-hormonal means it won’t mess with testosterone levels in the male body, and reversible means this is a temporary option for those who aren’t ready to have a family just yet. Currently, there are many other options out there for male birth control, including non-hormonal pills, heat methods, and ultrasounds, which also provide temporary sperm-blocking options for men.

In my opinion, different forms of male birth control are GREAT for our society. We live in a culture that puts the responsibility and societal pressures of not getting pregnant solely on women, even though men are equally responsible for creating a pregnancy. According to the Center for Disease Control, almost half of all pregnancies in the US are unintended, and 80% of all teen pregnancies are accidental.

Why is it important for men to consider taking birth control when so many women already take it? 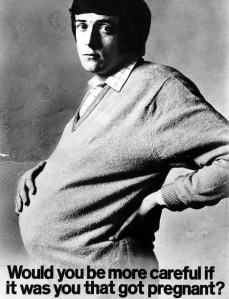 Currently, pharmaceutical companies are making millions of dollars off of female birth control. It’s not profitable for companies to produce one effective form of male birth control, while they could be selling pills that need to be taken daily for women. As Samantha Allen puts it, “why sell a flat-screen television to a man, when you can rent one to a woman for a decade?”

The unfortunate truth is that money and politics often get in the way of reproductive rights, at least here in America. As we saw this past summer with the Hobby Lobby case, the Supreme Court ruled that closely held corporations could deny birth control coverage to their female employees, in accordance with the 1993 Religious Freedom Restoration Act. This decision was made from the fact that Hobby Lobby Stores Inc. is a Christian-based company, and believes IUD’s and morning after pills to be “an early form of abortion.” The Supreme Court decided that “closely-held” corporations did not have to provide coverage for needs covered by the Affordable Healthcare Act, if those needs conflicted with the company’s religious beliefs.

My question is, what would happen if birth control shifted into the hands of men?

Would male birth control be a topic of political discussion? Would politicians, left and right, be fighting for men’s rights to choose or not choose if they wanted to have a baby? Would legislation be passed to control men’s bodies?

I urge you to talk about this topic with your male friends, boyfriends, and significant others, to just get the discussion rolling. Would your male friends take temporary birth control, with all the benefits I listed above? I would love to hear what your friends say, so feel free to comment below!

P.S. Vasalgel is starting human trials in 2015, and with the success of those trials, could hit the US market by 2017. THE FUTURE IS NOW!