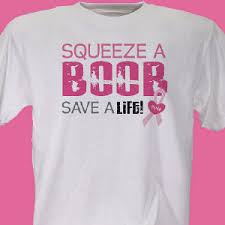 So it’s Breast Cancer Awareness Month, as I’m sure everyone has no doubt noticed by now. In case you hadn’t though, the insane amount of pink products would probably have helped to tip you off. Seriously, so.many. pink. products. Which is of course the perfect transition for me to talk about an issue that I tend to have with the breast cancer movement. But let me preface with a few fun disclaimers since it far too easy for everything that follows to be misconstrued…..

I am absolutely opposed to cancer and I absolutely 100% support and stand behind everyone who has been affected by this terrible disease. 100%. I absolutely think that a cure should be found and this girl will run miles with the best of them to help raise money ( well actually it might end up more walking but still…)

What I do have a problem with is the now blatant sexualization of breast cancer and the effort to raise breast cancer awareness. Shirts like “Save the Tatas, keep them from stealing second base”, “Support my Rack”, and “Squeeze a boob, save a life” might be raising awareness about breast cancer, but they are also intrinsically linking the experience of fighting breast cancer, or having breast cancer, to a woman’s sexuality, which of course must lie in breasts, which we know due to the extreme measures we go to save them. When I see one of those shirts, the first thing I tend to think of is “boobs”. It might not be intended, or perhaps it is, but I do feel that what has developed is a well-meaning campaign that relies on old strategies of sexualization to raise money, and while it might work, and I think raising money to find a cure is good, I really really wish that we could find a way as whole society to address breast cancer. As Peggy Orenstein says in this NY Times article“…today’s fetishizing of breasts comes at the expense of the bodies, hearts, and minds attached to them.

We’re kind of boob-centric on this issue, no joke. We are so very focused on whether or not women will lose their breasts and how can we help them keep them, that I feel like we, or at least I, often forget that behind the most obvious struggle is one probably at least as profound, navigating such a difficult diagnosis. The emotions, the heartaches, the suffering that accompanies that, I have a hard time even contemplating what that might be like but I have been very ill before and I do know that it’s not just the body that hurts in an experience like that and that oftentimes, addressing the physical wounds doesn’t come close to healing the emotional ones.

My other concern is about women who suffer from cancer that is metastatic, that has spread beyond the breasts into other areas of the bodies. Their diagnosis is far more grim and I often wonder, do they feel ignored and overlooked? After all, this isn’t just about their breasts. And what about women who suffer from other forms of cancer? Believe it or not, breast cancer isn’t the most deadly cancer affecting women in the US, in fact, lung cancer kills more women, and men too,  each year than any other cancer. Yet when I walk around the store, I don’t see products geared towards ending lung cancer, or at least, not to the crazy scale that I see products geared towards breast cancer.

And the giant piece missing out of this huge equation so far? Men. What about men who are diagnosed with breast cancer? Do they feel as though the pink ribbon movement is for them? Do they see a massive campaign geared towards them as well, one that includes their pictures, their stories in the media and advertising? From just a quick hit on the internet or a stroll through most stores, the answer seems to be no. In fact, I feel that there is actually a silence when it comes to men having breast cancer. Sure, we talk about it and everyone knows that men can suffer from breast cancer as well, but the dialogue, the action, the intense focus is almost completely geared towards women.

These are just the thoughts that float through my mind when I see “Support my rack” shirts, and here are those of some others as well….

What do you think?

4 thoughts on “Save my boobs? Save my life.”