Since the #MeToo  and #TimesUp movements began, they have sparked a wave of women speaking out against abusers, harsher punishments for said abusers and a string of Media coverage, all focused on removing the filter over sexual assault and harassment and portraying it for what it truly is. There has been change in the world and it is becoming easier for all women to speak out about their experiences with assault and fight back.

This movement has motivated me and all of our bloggers to be involved and educated in this issue. And tonight I was motivated to attend a lecture given by Jennifer Cassetta at James Madison University called me “Hear Me Roar” , all about fighting back against assault and abuse against women. 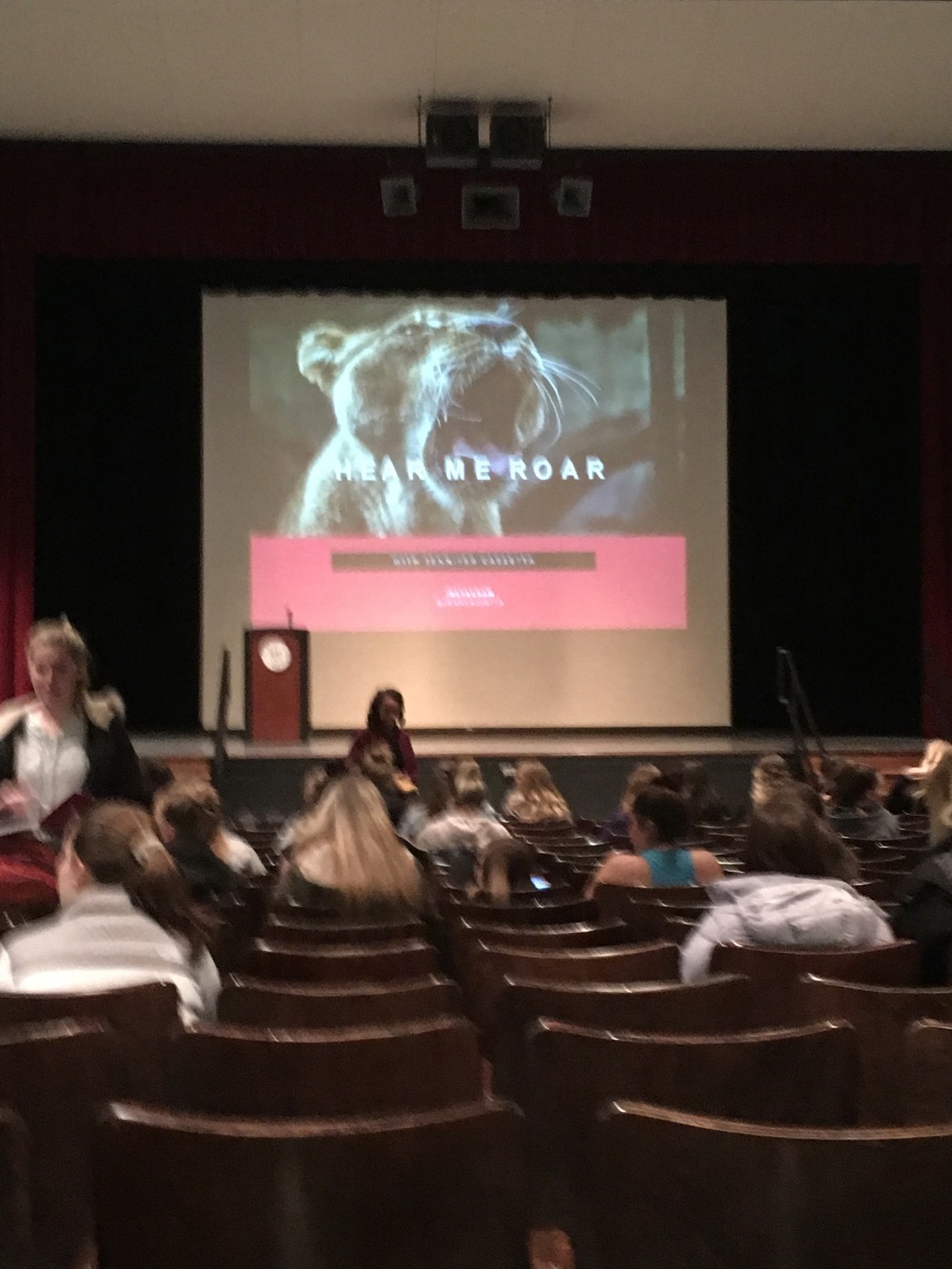 Now I know that for some women, the idea that we have to fight back or learn to protect ourselves is missing the objective. Many believe that we shouldn’t have to learn to defend ourselves because it is others who need to learn not to attack, abuse, assault or harass us. Let me just state: I 100% agree with that. We should NOT be have to learn self defense or emotional defense to prevent people from harming us- because simply stated: people shouldn’t be trying to harm us.

BUT- the fact of the matter is, we are still in a time where people are attacking and assaulting women and until this fact is eradicated, shouldn’t we be able to fight back and feel like bad-asses?

Hence the reason I attended the lecture. Jennifer Cassetta is a well accomplished personal trainer, nutritionist and Black Belt in martial arts. She founded the Organization Stilettos and Self Defense.  So no surprise she began her lecture with talking about learning self-defense.  However, what drew me in wasn’t the physicality of self defense, but how she talked about what mental and emotional benefits it provides. When you are able to kick some butt and protect yourself, you feel empowered and strong. She continued by not only talking about protecting yourself but also protecting other women. Her 3 methods were EMPOWERING other women to talk about their experiences, creating a SPACE for them to talk about it and BELIEVING THEM, and becoming better bystanders.

She also discussed her ABC’s of self-defense (both physical and emotional) which are Awareness, Boundaries and Communication. These all covered ways for us to look out for ourselves in potentially dangerous environments, protect ourselves from abusive relationships, and communicate our own safe spaces.

Throughout the entire discussion I still did feel somewhat conflicted by the concept of changing our ways instead of those who offend us. But when I looked around the room of 50 to 60 women, and saw them standing  and confidently yelling safe phrases such as “Don’t Touch Me,” “That is not okay with me” “I am strong” “Back Up,” it was empowering. It was inspiring. And it was important. And it made me view this as perhaps a new addition to the #MeToo and #TimesUp movements. Let’s start by not just showing if you mess with us, we’re going to speak up. Lets make them see that they CAN’T mess with us. Let’s make them AFRAID to mess with us. Because we are all vibrant, crazy, badass women, and we just found another way to show it. 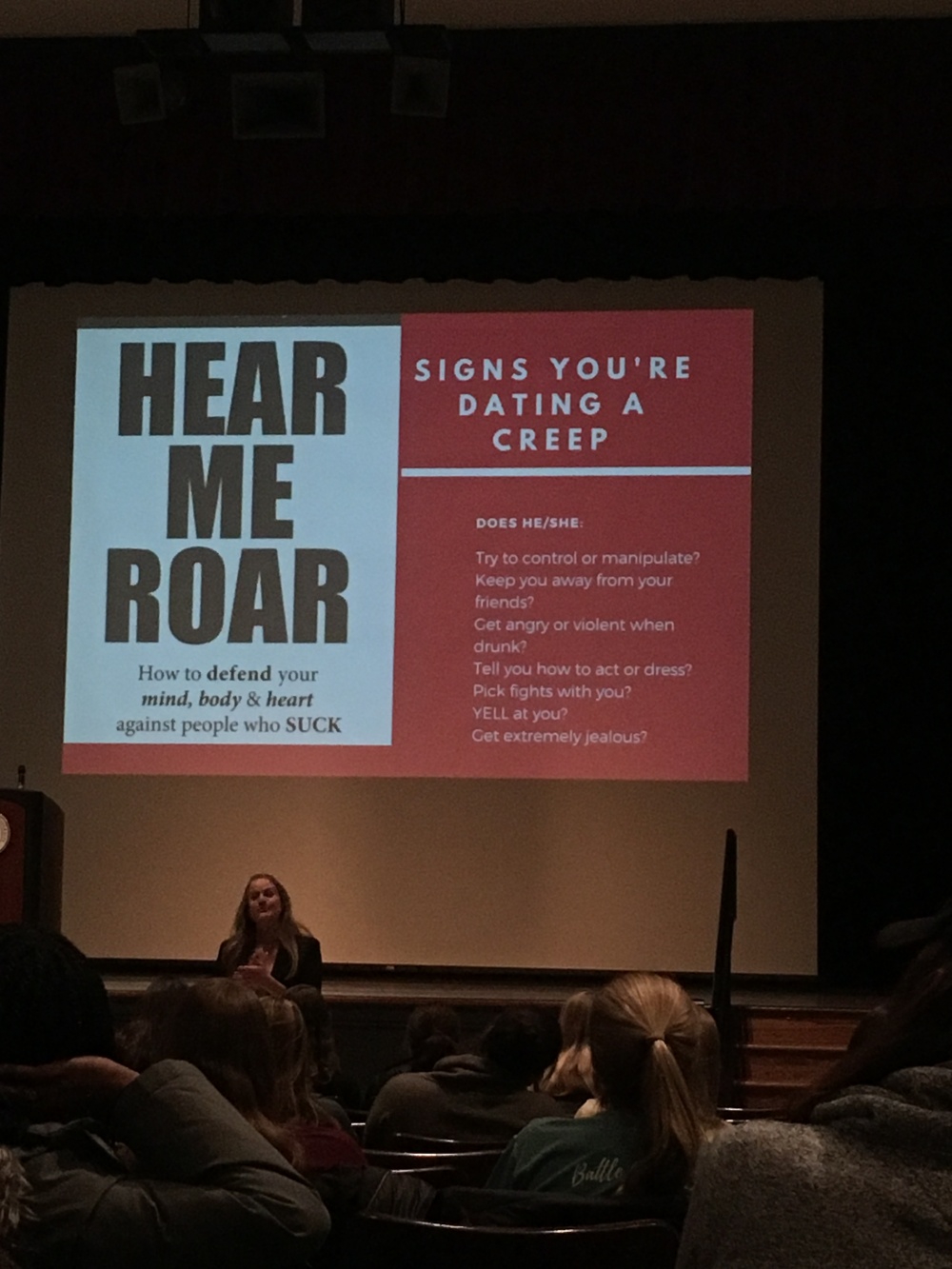 One thought on “Hear us Roar”