If you’re keeping up to date with Shout Outs blog posts, you’ll know that few of our bloggers took a trip and attended the National Young Feminist Leadership Conference in Washington D.C this past weekend. Let me just say, it was amazing. Actually, “amazing” doesn’t even give it the justice it truly deserves. Just one hour in, and my first few pages in my notebook were filled with ideas and influential quotes from the speakers. One of my favorite quotes from the opening panel was from Loretta Ross, a nationally recognized leader in the feminist movement, where she stated “It’s not about the movement supporting you, it’s about you supporting the movement.” In just one sentence, she was able to capture the essence of what it means to be an intersectional feminist. 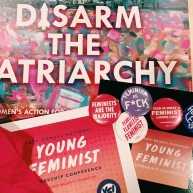 (Pictured above are some amazing swag they were giving away at the conference.)

Throughout the conference, we had numerous panel discussion options we could attend and one of the many I attended that I had found most interesting was a panel labeled “Stop Betsy Devoss: Title IX” where a panel of sexual assault survivors spoke on their experiences not only turning their trauma into triumph, but as well as their fight to get justice.  They spoke up about how since they didn’t necessarily know everything about Title IX and what it could do for them it resulted in a lot of confusion over their case.  They didn’t want others to experience a similar complication that they did, and to make sure we informed ourselves on our rights and how to get our well-deserved justice. Since, at the end of the day Title IX is about our safety.

After each panel, the floor would be open to questions and after each discussion I realized there was an overwhelming amount of situations where high schools and universities seemed to try to silence them. Whether it be shutting down their LGBTQ+ clubs or making it too difficult to even start in the first place. This part stuck with me, because a similar situation happened to a feminist club we tried to start my senior year of high school. As expected, there are a whole list of things you have to check off before you can have an official club. We expected this and we were ready. The last item on our check list was getting the principle signature. We sent in our request in August and by October we still hadn’t heard back from the administration, despite numerous reminding emails. So, we decided to hold the meetings anyway and for months we were successful. Somehow, the administration heard that we started having “unofficial” meetings and immediately told us we weren’t allowed to have another meeting until we were officially accepted. Oh, so shockingly – they never signed off on it. They just kept telling us they had other priorities that were deemed by them as more important. But no worries; that year we officially got a ping pong club, an obvious necessity that was incredibly essential to our lives, and that needed to be signed off on immediately.

At the time, I knew it was blatant bias in the favor of continuing the cycle of sexism that roamed our halls (and world). But I felt that I couldn’t do anything, we had tried our best and that’s all that we could do – in fear that they may suspend us and jeopardize any potential acceptances to universities. After the conference though, it made me realize that we NEED to hold our schools accountable. The cycle of protection for sexism, homophobia, racism etc. won’t end if we don’t do anything about it.

Fight the system. Young people hold the power; we are the change.

One thought on “Speak up and Shout out”