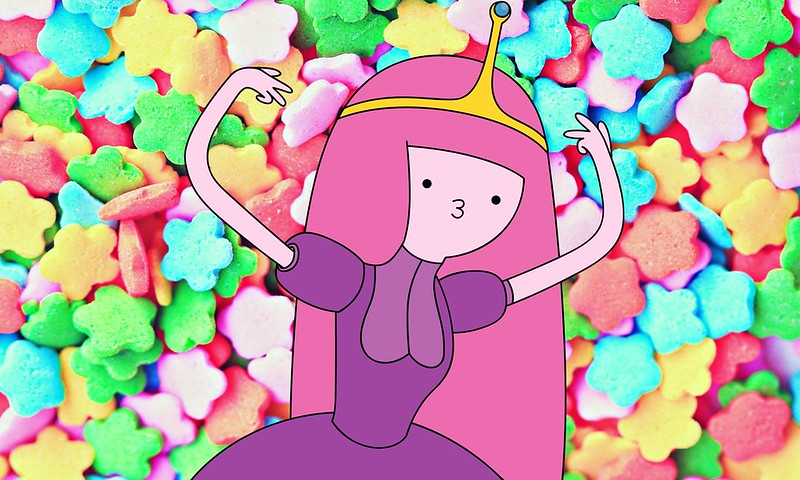 I don’t know how many of you watch Cartoon Network’s Adventure Time, now in its sixth season, but I’m just going to put it out there: I love it. It’s silly and funny and sometimes trippy, but it also brings along some powerful, equality-friendly messages that I believe are expressive of feminist ideals.

The show is centered around Finn the human and Jake the dog, who go on adventures in the magical land of Ooo, but not all episodes are from their perspective, and they’re outnumbered by awesome female characters that help them along the way. It has a ton of diverse, empowered female characters, and it portrays some feminist values that I think are good to instill in both its many child and adult viewers

Even though most of the female characters are princesses, they all have other characteristics and hobbies that help to define them as more than that and subvert stereotypes like the damsel in distress cliche, by saving Finn and Jake from their own messes many a time.

Although it delves into romantic relationships sometimes, the girls’ relationships with Finn don’t define them, and they show that they are independent and powerful on their own, and are often more interested in their hobbies than romance. All of the characters also have realistic flaws that round them out. I think it shows that girls make great friends because they are smart and strong and have many talents that give them worth beyond what they look like and what they can do for you.

I think Finn realizes he sometimes lacks the knowledge of how to treat girls, but he learns and listens and does his best to treat them like regular people and friends. This show definitely passes the Bechdel Test and promotes female friendship by portraying close relationships between female characters too.

The main female character is Princess Bubblegum, the genius scientist and logical-minded ruler of the Candy Kingdom, who I think makes a great role model for girls. Her best friend, Marceline the vampire queen, is a cool rock-n-roller who rules the Nightosphere, and uses her musical and rebellious talents to help her friends. It’s rumored that the show’s writers implied that Marceline and Princess Bubblegum once dated, hinting at it in the episode “I’m Just Your Problem,” where Bubblegum lovingly keeps and smells a shirt that Marceline gave her. If it’s true, then that’s a pretty cool step for equality in cartoon shows.

And then there’s my favorite character and the inspiration for my handle, (lumpyspaceproblems), Lumpy Space Princess (LSP): the sassiest, most dramatic, character who can be a little vain at times, but her overt self-confidence and love of her body, even when it’s clear that others aren’t on the same page, make her really cool to me. Oh my glob, she’s totally my hero.

Another cool feminist theme is when the show does whole episodes where all the characters swap genders, (The Fionna and Cake episodes). Gender swapping and gender ambiguity teaches us that gender doesn’t matter so much, and that girls and boys can all like and do the same things.

BMO, Finn and Jakes’s talking video game system/friend is the only character who stays the same in the gender swap episodes. He doesn’t have a strictly assigned gender, and has referred to himself at times as both a boy and a girl. He also loves other unclearly gendered objects like the bubble that he married in “BMO Lost.” This can be seen as portraying 3rd Wave feminist values which tries to account for women of all backgrounds, ethnicity, sexual orientation, and genders.

By challenging the idea that a character needs a single gender identity, BMO exists in a fluid gender zone and shows that there are people who don’t fit into binary gender roles, and that gender isn’t as strictly experienced as our social structure makes it out to be, because gender is a social construction. BMO could be male or female, or both or neither because it doesn’t matter! whatever! Gender equality messages are a great thing for children’s programming, and this show teaches us a lot. I think you should all watch it!